Penguin was just a small, wobbly-headed magpie chick when my son, Noah, found her lying injured on the grass after being blown out of her nest, located some 20 metres up a towering Norfolk Island pine tree. She was very lucky to survive such a horrendous fall but without immediate care would have died within a day. So my wife Sam and Noah raced her back home where we built her a simple nest, fashioned from an old cane laundry basket, and kept her warm with a tiny blanket. Our sons immediately named her Penguin, due to her black and white plumage and large feet. Sam and I decided that she could live with us until she was fully healed and became strong enough to fend for herself.

It is not easy to look after any injured wild creature and this is especially true of a fragile baby bird … as we soon found out. Caring for Penguin during those first few weeks was a massive commitment, but at the same time it was a wonderful experience for us all; both as individuals and as a family.

We undertook a great deal of research about magpies and were extremely grateful for all the specialist veterinary advice we received, especially in regard to Penguin’s diet. Australian magpies are omnivores, meaning they will eat almost anything, but during their critical growth phase the nestlings consume a lot of insects, far more than we could ever hope to provide, so we had to ensure Penguin consumed an easily digestible diet that was high in lean protein and would contain all the essential nutrients she needed to form strong bones and flight feathers.

Initially Penguin had to be fed every two hours during the day but slept through the night. Noah and his two brothers, Oli and Rueben, took turns with feeding duty. After preparing a special mix of ingredients into a kind of magpie porridge the boys would pinch a small amount of food on the tips of their fingers and hold it above Penguin’s head, more or less like a mother bird would do with a beak-full of grubs – Penguin would lunge greedily at her meal and swallow half the kid’s finger in the process; which was hilarious, kind of gross and somehow quite endearing.

While getting Penguin to eat was a real victory, her recovery remained touch and go. There were days when Penguin looked so weak we thought we might lose her, and some evenings when we knew there was a chance she wouldn’t survive the night. But we continued to do all we could for the smallest member of our family and over time she grew in both stature and confidence. After a while she started to perch on a branch we attached to her basket, and soon after that she began to explore her world and discover her abilities. I’ll never forget when Penguin took her very first flight inside our lounge-room – it was an amazing moment for all of us.

As Penguin’s strength grew so did her curiosity. We never locked her inside any kind of cage so she was always free to venture outside the house. It didn’t take long before she started to forage for her own food in the backyard and it was clear she was becoming increasingly independent.

Despite being free to leave she still chose to sleep inside the house for at least six months – mostly in her basket but also up on the window sill. We loved that she wanted to stay with us but we also wanted her to follow her natural behaviours plus, it must also be said, that there is no such thing as potty-training a magpie – at least so far as we can tell. After Penguin “redecorated” the furniture, cushions, lounge and computers for the thousandth time we decided it was finally time for her to officially move out.

Fortunately there is a large frangipani tree in our yard that Penguin always felt comfortable in, so that became her home. However if we ever leave a window open she’ll fly inside the house at sunrise and scamper down the hallway to one of the bedrooms and jump into bed with Sam and I, or one of the boys; rolling over onto her back for a bonus sleep-in or perhaps just to say hi.

Australian magpies are known for their beautiful songs and Penguin certainly has a wonderful voice. She began singing short songs during the day from a very early age and would eventually sing for hours and hours at a time. Whenever we’d pull up in the driveway after being away from the house she’d let out a loud and melodic warble to welcome us home then flap her wings with excitement and run straight to the front door to be let inside.

Penguin always seemed to know exactly when our boys would be walking home from school. At around 3.30pm she would position herself in the orange tree at the edge of the yard, waiting for them to come around the corner and into view. As soon as she heard them approaching she would break out in song and the boys would happily reply in their best magpie impersonation, and then she would call back to them again – just as if they were having a musical conversation.

Though she has now grown up to be a beautiful adult bird it hasn’t always been easy for Penguin. The older, resident Magpies are fiercely territorial and at times have attacked her, tearing out feathers and inflicting painful wounds with their sharp beaks to let her know that this is their turf. If Penguin is ever caught in the wrong place at the wrong time she carries out a swift retreat, flying at top speed through any open door or window into the safety of our house.

Despite her many encounters with bully-birds Penguin maintains a bright and friendly personality and is kind to all the birds she meets. She has built a close friendship with a pied currawong with whom she shares scraps at the back door, and has even baby-sat a sickly rainbow lorikeet. The funniest occasion I can recall was when she befriended another young magpie who timidly came inside the house and sat with Penguin by the window – Sam and I felt like we were chaperoning a first date.

While she will always be a part of our family Penguin does not belong to us. The world is hers to explore and she regularly travels elsewhere, sometimes for days at a time; probably to find an uncontested area of her own. During the Christmas holidays in 2014 she disappeared for six long weeks, and we started to fear the worst – but then, with a large squawk, she suddenly appeared at the front door on Rueben’s birthday, which was incredibly special.

These days Penguin comes and goes as it pleases her. We won’t see her for a while and then, without warning, she confidently walks in the door as if nothing has changed and jumps straight back up onto the kitchen sink for a drink of water and starts to poke about the house looking for tasty things to eat (spiders are her favourite).

We all love this crazy little bird, and the experience of caring for her when she was utterly helpless and then watching her mature into a strong, brave and wise female has been amazing, and is certainly something we feel is worth sharing.

As a photographer I feel blessed that my images of Penguin have given joy to so many people all around the world, and I am grateful to everyone who has connected with me via social media for making this possible.

There is a lot more to Penguin’s story than I can easily convey here, or even through the images I share, which is why I’m delighted that I have created a book about Penguin with New York Times best-selling author, Bradley Trevor Greive. If you wish to order a copy of: Penguin Bloom – the odd little bird who saved a family, please click on the following link. http://booktopia.kh4ffx.net/kmWKV

I’d like to add that BTG and I, along with our publisher, ABC Books, are donating 10% of all royalties from Penguin Bloom to Spinal Cure Australia. When you read our book – which will make you laugh out aloud and also bring plenty of tears to your eyes – you’ll soon realise just why this cause is so important to us and why I hope you’ll consider supporting this wonderful charity yourself http://www.spinalcure.org.au

Thank you for visiting Penguin Bloom’s official website and for all your love, support and feedback. 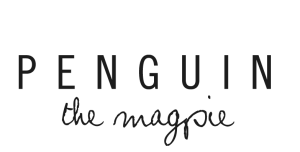